On March 1, 2017, registrars of all colleges in BC Health Regulators (BCHR) signed the “Declaration of Commitment – Cultural Safety and Humility in the Regulation of Health Professionals Serving First Nations and Aboriginal People in British Columbia”. The signing ceremony formalized their commitment to integrating cultural safety and humility into their practices as health profession regulators. BCHR’s historic commitment followed the landmark commitment to cultural safety and humility made by the First Nations Health Authority (FNHA), the BC Ministry of Health, and the six other BC health authorities in 2015. 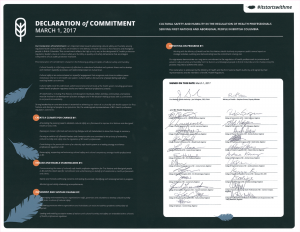 Signing the Declaration launched a partnership with FNHA to support the incorporation of cultural safety and humility in alignment with the regulators’ public interest mandates. BCHR has actively supported relationship-building and joint activities with FNHA and hosted two educational events to promote awareness and understanding, including:

A number of BCHR colleges have also participated in specific activities to advance the integration of cultural safety and humility within their organizations.

In March 2018, BCHR published One year in: A report on the achievements following the signing of the Declaration of Commitment to Cultural Safety and Humility (PDF).

In June 2020, BCHR published Three years in: A report on the achievements since signing the Declaration of Commitment to Cultural Safety and Humility (PDF)

In April 2019, BCHR launched the Cultural Safety Task Force, including staff representatives from the Colleges of Physical Therapists, Occupational Therapists, Nursing Professionals, Dental Hygienists, and Pharmacists. The task force is coordinating ways to support all regulatory colleges in fulfilling their commitment to the Declaration. The task force participated in the Gathering Wisdom Forum, held January 14-16, 2020, as an exhibitor. See the BCHR Cultural Safety Task Force report on the 2020 Gathering Wisdom Forum (PDF).