BC Health Regulators (BCHR), and its predecessor organization Health Profession Regulators of BC (HPRBC), led campaigns to raise public awareness about the role regulatory colleges play in patient and client safety. These campaigns emphasized the importance of choosing a regulated and accountable health professional. 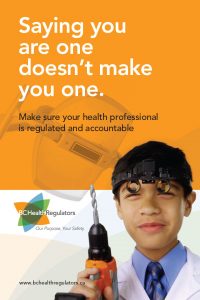 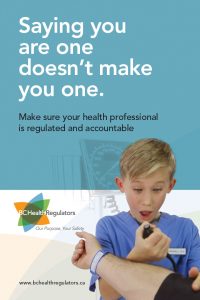 In September 2013, HPRBC launched the “Our Purpose, Your Safety” public awareness campaign. In October 2015, BCHR launched a new campaign: “Saying you are one doesn’t make you one”.

Featuring child actors pretending to be health care professionals, “Saying you are one doesn’t make you one” conveyed a key message about misrepresentation of health professionals, including those who practise without authorization, and reinforced the requirements and advantages of regulation.

The two campaigns consisted of bus shelter, newspaper, television, and digital advertising and public service announcements, pamphlets in multiple languages, articles in community newspapers, letters to the editor, social media, and other elements.